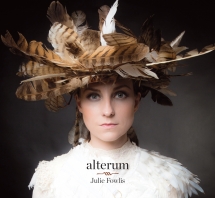 During an impressive career spanning more than a decade, with multiple awards, accolades and four studio albums, she has until now, sung primarily in Scottish Gaelic. The Latin title of her fifth studio album 'alterum' gently suggests that this record is a departure from what has gone before. Fowlis's ascent to international stardom, putting Gaelic folk on the world music map, is evidence that a sublime voice transcends language and culture' - Guardian Julie Fowlis originally hails from North Uist in the Outer Hebrides and is now based in the Highlands of Scotland. Firmly established as a world music artist with a natural interest and ability to cross-over into other genres and styles, she will forever be known as the singing voice of Merida, the female protagonist in the Disney-Pixar Oscar/Bafta/Golden Globe winning movie 'Brave'.