Julie Fowlis - Mar A Tha Mo Chridhe (as My Heart Is) 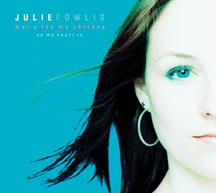 It is little wonder that when Pixar ('Finding Nemo', 'Toy Story', 'Up') were searching for the perfect, authentic singing voice to feature in the trailer to "Brave", their hit animated film set in the ancient highlands of Scotland, their research led them to one of the Western Isles' true contemporary treasures - Scots Gaelic singer Julie Fowlis. 'My Love Is On The High Seas' is a beautiful Gaelic lilting air which first appeared on Julie's debut album 'Mar A Tha Mo Chridhe (As My Heart Is)'. Disney-Pixar featured it in a US TV trailer for Brave which was broadcast in February this year during an ad break for the 2012 Oscars ceremony. 'Mar A Tha Mo Chridhe' or 'As My HeartIis' was launched at the Celtic Connections Festival 2005. As ever the songs and tunes are shrouded in the historical folklore of her native North Uist in the Western Isles of Scotland. Julie's beautiful voice, coupled with an all-star crew combine to create another spellbinding selection of traditional material gathered by Julie from the tradition-bearers of her homeland