Kaal Akuma - In The Mouth Of Madness 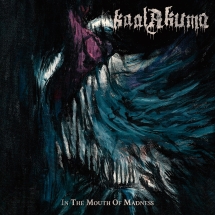 180g (Heavy Vinyl), 350gsm Cover, Insert, Paperbag, Poster in A2 format Death Metal offenders KAAL AKUMA from Bangladesh unleash their first album - 36 minutes of heavy and unrelenting frequencies await the listener. Located somewhere inbetween the defining classics of Death Metal and new school brutality, this album creates a tense and brutal atmosphere that encorporates all the classic virtues, while still managing to create an own sense of identity. The pacing ranges from slow and torturous to fast and unrelenting, the guitars deliver razorsharp riffs and solos and the drums accompany the vocalist's ghoulish growls in furious precision. Unlike with many newer and more forgettable projects, KAAL AKUMA maintain a very high level of musicianship and production, which makes them stand out among the crowd noticeably. Fanatics may be reminded of the glorious days of Massacre and early Death, as well as Dead Congregation, which the band sees as one of their main influences. However, this is not solely a recollection of the past, but an album that can easily take on any contemporary act when it comes to brutality and determination. Tracks like „Black Death Sacrifice" and „In the Mouth of Madness" are sure to excite any connaisseur with their purulent and decayed aura of cosmic horror and unspeakable rites. KAAL AKUMA is not to be missed! KAAL AKUMA is Plague (Guitar), Ah Puch (Drums), Tiyanak (Bass & Vocals). Logo by Kabir and Seraj. Artwork by Aryan, June 2019. Photos taken by Imteaz and Seraj, January 2019. Lyrics by Tiyanak/ Rivoo. Recorded at Congregation Studio, Dhaka (Bangladesh) by Akif/Plague, April 2019. Drums recorded at Studio 100 Miles, Dhaka (Bangladesh) by Ayon, April 2019. Mix and pre-mastering by Aynus Tazwar Zeus at Studio Baksho, Dhaka (Bangladesh), June-August, 2019. Final Mastering by M. Dahmen at Liquid Aether Audio (Germany). Executive Production by Dunkelheit Produktionen, 2020. All Rights reserved. WWW.DUNKELHEIT.CC