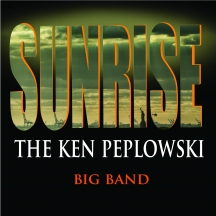 Two of Ken Peplowki's biggest inspirations in music have always been Duke Ellington and Frank Sinatra and he recorded everything live with the band. Ken liked the adrenaline rush of that style of recording. Great musicians here who respond well under the pressure of recording, but they all play with individual sounds and styles.

Clarinetist Ken Peplowski assembled the cream of the crop of mainstream swing players for this big band session. There's a fine mix of Great American Songbook material, some Braziliana, some bebop, a couple of Duke Ellington tunes, and even something from the Walt Disney songbook (''When You Wish Upon a Star'' from the 1950 movie Pinocchio) - all featuring superb big-band arrangements. Peplowski's clarinet work gets most prominence here - showcasing his instrumental mastery and clever ideas. There are also fine moments from his bandmates, including saxophonist Adrian Cunningham on Sonny Stitt's hard-driving bop classic ''The Eternal Triangle,'' Cunningham and trumpeter Jon-Erik Kellso on the gorgeous but under-recorded Ellington composition ''I Like the Sunrise'' (hence the CD title),m and alto saxophonist Jon Gordon on ''Come Back to Me.'' The real treat here is ''Clarinet in Springtime.'' Alex Wilder wrote and arranged it in the early 1940s for Benny Goodman, but it had ever been played or recorded by Goodman or anyone else until now.

With a tone like finely woven silk, wondrous technical agility, and an itching curiosity that encompasses the stylistic breadth of mainstream jazz, Peplowski can take his outsider horn in any direction he cares to. Here, Peplowski lands himself in luxury by approaching both classic and overlooked work from the heyday of American popular song.

...this album is absolutely full of lovely moments and joyful swing. Strongly recommended...

You want to hear some really smashing big band? Look no further. Peplowski leads on this date like it was recorded when labels paid attention to records like this. With a nonpareil crew backing him, the clarinet ace just plain delivers. The set card is mostly familiar, the presentation is original and one of a kind. The kind of stuff you love to show up for, this swinging set is simply going to make your day. Killer stuff throughout.