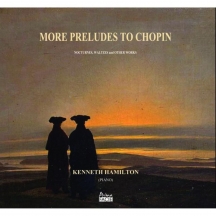 As with the original CD, this new recording shares its inspiration with that of my book After the Golden Age: Romantic Pianism and Modern Performance (Oxford University Press): a fascination with the performance styles of the so-called "golden age" of pianism from Chopin and Liszt to Paderewski--from around 1830 to 1945--and an abiding interest in how Romantic and late-Romantic approaches might be adopted or adapted in a modern context to enrich our own playing." This new recording features a strikingly eloquent later version of Chopin's famous Nocturne op.9 no.2 using the composer's personal variants, an epic rendition of the dramatic C minor Nocturne inspired by Chopin's own interpretative advice to his students, and a gripping performance of the great Polonaise-Fantasy. The CD is accompanied by Hamilton's fascinating notes on the pieces and their performance history.