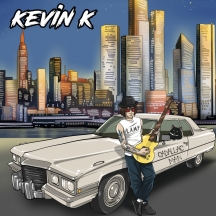 For a touring musician with established markets in Europe, Kevin K., rock's most unheralded (and criminally ignored) singer/songwriter did what he always does when faced with adversity. Armed with a bundle of cigars, a never-ending glass of whisky and his trusty Les Paul T.V. guitar, he hunkered down in the studio and began to write and record. The songs poured out of him. Two years later - a rejuvenated KEVIN K has returned with CADALLAC MAN, a gargantuan 20-song album that is littered with potential radio hits, songs of epic proportion and much more. Musically, there is no better exponent of catchy power pop than KEVIN K, and many of the songs on CADALLAC MAN are heavy on the melody, with sweet melodies, killer guitar riffs and sing along chorus'. Yet much of the material also has a gritty edge with a sound evocative of the glory days of NYC punk. This is KEVIN K's pedigree, its in his blood. However, it's the Stones' influence that sets CADALLAC MAN apart from any of KEVIN K's previous albums.In many ways, CADALLAC MAN is for KEVIN K what 'Exile on Main St' was for the Stones or what the 'White Album' was for the Beatles. CADALLAC MAN is a double album in every sense, it has tons of material and it ranges across a number of different styles. Unlike the Stones or Beatles, as well as having written all the songs, KEVIN K plays every instrument on every song. This is solo album number 33 for KEVIN K and with its consistently strong material, CADALLAC MAN makes a strong claim as KEVIN K's magnum opus. That's a statement not made lightly considering KEVIN K has been making records since 1978. During lockdown, Kevin put his 'Keith Richards' hat on and began writing songs in open G five string tuning for the first time. The resultant songs could indeed be extras on Sticky Fingers or Exile. Thematically, some of the songs have a reflective or observational quality. There are songs about growing up (Pendleton) to the years of living as a musician in NYC (Village Girl, 1989). There are songs about loss (I Miss You, Tear Drops Don't Stop, You Let Me Down), songs about the covid lockdowns and dystopian state of the world (No Respect, Dum Days, Zombie Heat), and hopelessness (Start Me Down). KEVIN K comes full circle and closes the album with A NEW LIFE, a song of optimism about the future ahead after overcoming adversity. There's even the ultimate tribute to the Ramones with NO RAMONES.