Klaus Schulze & Pete Namlook - The Dark Side Of The Moog Vol. 1-4 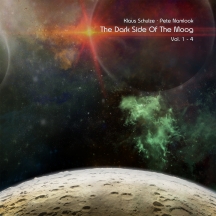 Complex re-release of the most remarkable and worldwide sought afterSeries "The Dark Side Of The Moog" by German electronic pioneers Klaus Schulze and Pete Namlook (aka Peter Kuhlmann) in three slip lid boxsets, each with 5 CDs, incl. bonus material and new linernotes. The first box contains Vol. 1 to Vol. 4 and the "Best Of"-Album "The Evolution Of The Dark Side Of The Moog".