Debut album from Los Angeles band currently kicking up a storm in the USA, the UK and Europe. 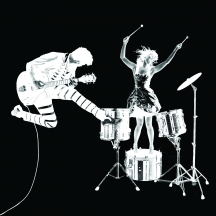 Rob Kolar & Lauren Brown have created a sonic world that straddles genres such as Desert Disco, R&Beyond, Space Blues, and Glam-a-billy. Rob produces, mixes, sings and writes the material. Lauren has invented her own drumming style. She tap dances rhythms with her feet atop a bass drum while simultaneously playing a stand-up kit. KOLARS is one of those rare acts which descends from another dimension, struts its sequin skin, blares its unabashed musical thrill ride and leaves audiences with their mouths on the floor.

In 2017, their self-titled debut album received wide critical acclaim; Huffington Post ''instantly fell in love with their tantalizing sonics and their energetic apocalyptic marvel'', Paste Magazine ''KOLARS play their unique blend of 70s glam rock, 90s grunge and twangy country with every inch of their body'', Denver Post ''KOLARS has a knack for buffing your weathered perspective to a glinting sheen. The world isn't on fire; it's glowing.''

KOLARS have toured extensively across the US, Canada, and Europe, playing many festivals and concerts in front of thousands. They have headlined national tours and have shared bills with Spoon, LP, Julian Casablancas & The Voidz, STRFKR, The Kills, Best Coast, Shonen Knife, RZA, Pussyriot, Built To Spill, The Horrors, The Growlers, Alanis Morissette, Funkadelic, The Revivalists, Father John Misty, The Roots, Nikki Lane, Strawberry Alarm Clock and many others. Their music has been featured in many high profile TV series such as Homeland, American Crime, New Girl and Shameless and striking ads for Vera Wang and Google.

''When I first saw KOLARS live, I was incredibly impressed. Their live dynamic is nothing like I've seen-the modified drum kit, the tap dancing, the amazing songwriting. They have it all. I'm so happy to be releasing a song from KOLARS, who are one of my new favorite artists.''

I instantly fell in love with their tantalizing sonics, and their energetic, apocalyptic marvel'

'Takes your heart by the hand and leads you to the dance floor, daring you to not feel motivated to dance, shimmy, just escape the mundane.'