Chicago guitarist returns with his organ trio & delivers a blistering set of tunes perfectly suited for the organ trio. 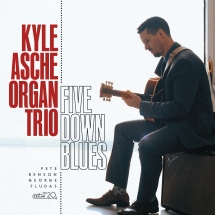 Kyle Asche's highly anticipated third CD as a leader, Five Down Blues places him in the company of of working band of Pete Benson on organ and drummer George Fludas. This swinging album includes original compositions by Kyle Asche as well as tunes by Horace Silver, John Patton, Horace Silver and more!

Beginning his professional career in Chicago in 2001, Kyle has appeared extensively throughout the city and beyond.

He has performed with Wynton Marsalis and Jazz at Lincoln Center, Melvin Rhyne, ''Killer'' Ray Appelton, Chris Foreman, Victor Goines, George Fludas, Ben Paterson and many others. While Asche is a versatile guitarist adept and comfortable in many different genres, the tenets of his style often find him in the company of many of Chicago's premier jazz vocalists and Hammond organ bands.

Now nearly 20 years into his tenure in Chicago, Asche continues to perform around the city on a weekly basis and can be found at many of the city's jazz rooms regularly. As an active and caring music educator, he has held the jazz guitar faculty position at Loyola University Chicago since 2010.