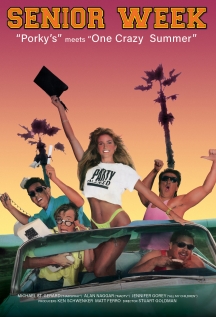 Everett and his party-hungry buddies embark on an all-night road-trip to the Florida beaches, for a week of fun, sun, and beautiful women. Mayhem ensues when 2 jealous girl-friends show up unexpectedly, along with a psycho teacher who's hunting down Everett because he owes her an overdue term-paper.

Senior Week' is not as good as 'Animal House', but it's still not worse than the millions of rip-offs that it spawned