Based on the classic 1987 film by Paul Verhoeven, ROBOCOP: THE SERIES stars Richard Eden (Shootfighter: Fight to the Death) as the titular cyborg. 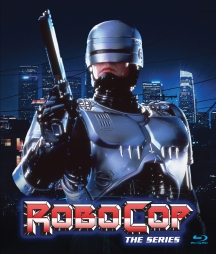 Based on the classic 1987 film by Paul Verhoeven, ROBOCOP: THE SERIES stars Richard Eden (Shootfighter: Fight to the Death) as the titular cyborg.

'RoboCop: The Series' is by far one of the best and unfortunately, most overlooked TV shows ever

Each episode was interesting, entertaining, and with an hour run-time, there was plenty of room to perfect the pacing of each script. The writing, above all else, was the true highlight of the show. you will find that it's something of a hidden gem. It's

This TV series actually manages to capture more of the original than either of the two theatrical sequels. Okay, it's toned down for television, but the self-parodying humor is there in all the right places

The series version of the blockbuster film does much with its far more modest resources. The story is much the same, but the satirical elements and personal stories are done more stylishly here

...this show was ahead of its time…

RoboCop: The Series is a much different beast than the classic Paul Verhoeven film and should be judged as such. You will not be witnessing anything in the way of gore or over-the-top violence; this is a show intended for general audiences with a RoboCop that disarms the bad guys instead of literally shooting the arms off of them.