They started this He'll finish it. Just what you want from a Stephen Seagal movie. 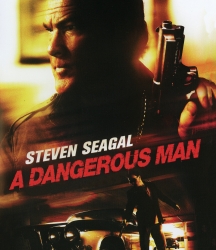 After serving 6 years for a crime he didn't commit, Shane Daniels, an ex-Special Forces agent, is released from prison with an apology from the State of Arizona, Within hours of his release, he unluckily witnesses the murder of a cop by members iof a Chinese mafia who have kidnapped a girl and a bag of drug money. In this action packed thrill ride, Shane intercedes with the help of the Russian mafia, whose boss owes him a favor for saving his son from the Chinese cop killing that set off the chain of events.

A Dangerous Man is an entertaining and, for the most part, well made action film. And that isn't often said about Seagal's output these days...solid direction, some decent characters and a boat load of hard hitting action

This is what you want when you rent a Seagal film

Seagal's best work in a while