A trip behind the scenes of Las Vegas' only Black male revue show and the often complicated lives of its male strippers. 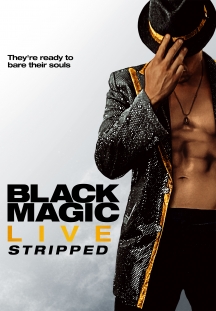 Through the eyes of its owners, Eurika Pratts and Jean Claude LaMarre, we are taken on a fantastical journey through Black Magic Live, Las Vegas' only all black male revue show. This film explores the challenges the Black Magic Live show and its core group of dancers have experienced during their 4 years on the Las Vegas Strip. While trying to establish their presence in sin city, the all-black show and its dancers and staff are met with racial prejudice, fierce competition and a series of emotional pitfalls as they struggle in the city. We meet Allen "LoverBoy" Hayward, 46 years old, the most senior dancer in Black Magic Live, the "OG" who struggles with the reality that his time may be coming to an end, as he has aged out of the dance scene and must make room for the younger guys who will soon replace him. We also meet Jetorious "KIng" Morris, 26, years old, a former NFL prospect, who saw his dream vanish after experiencing a career-ending injury and discovering stripping as a fallback career. There is also Jimmy "Lockz" Sigmond, a Vegas transplant from neighboring Los Angeles, who has served 7 years in prison before becoming a Black Magic LIve Dancer.