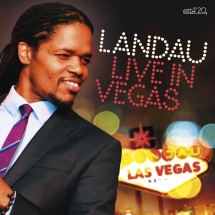 Landau Eugene Murphy Jr., the Sinatra and Soul singing ''America's Got Talent'' winner celebrates the 10th anniversary of his America's Got Talent win with ''Landau Live in Las Vegas'', a tribute to the Great American Songbook and Motown Magic.

Recorded on his birthday before a swinging Caesars Palace audience, Landau celebrated with a musical boundary-stretching set that few in the crowd will forget.

Landau's velvety voice fits like a glove on Cole Porter classics ''I've Got You Under My Skin'', ''I Get A Kick Out Of You'' and ''Night and Day'', and Sinatra staples ''Come Fly With Me'', ''L.O.V.E'' and ''Witchcraft''. The highlight of the album's first half may be Landau's wistful ''One For My Baby, One For The Road'' featuring a muted, mournful trumpet solo from Vegas showroom vet Greg Wing, a longtime member of the Landau, Tom Jones and Buddy Rich bands.

Landau then switches gears in a way that few other singers can convincingly pull off, with soulful takes on Leon Russell's ''A Song For You'', fellow West Virginian Bill Withers ''Ain't No Sunshine'' and ''Just Once'' from Quincy Jones and James Ingram. Landau kicks the party into high gear with ''My Girl'' and ''Ain't Too Proud To Beg'', getting a backup vocal assist from Theo Peoples, the only singer who was a member of both the Temptations and Four Tops.

It may be true ''What Happens In Vegas, Stays In Vegas'' but in the case of ''Landau Live In Las Vegas'', we've got a musical record of what went down preserved for musical posterity, and that's a mighty good thing.

'Could I see Landau headlining in Las Vegas? Absolutely.'

'It was a very proud and emotional moment to watch Landau win America's Got Talent; my family was pulling for him all the way from California. I'm so pleased that Landau is living his dream; a true American success story.'

'Landau is the complete package: talent, personality, character, class and humility, the ingredients for longevity. His sound is clean, pure and rich, but don't get it twisted...he's got R&B chops as well. He's very versed in his art and that should serve h

Landau Eugene Murphy, Jr is a truly inspirational and gripping memoir that reminds us all it is never too late to follow your dreams.'