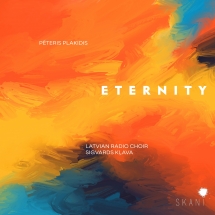 Peteris Plakidis (1947-2017) is - and will remain - one of the most significant Latvian composers. He observed life with a keen, sharp gaze and echoed it in his music firmly, strictly, actively. He tread quietly and imperceptibly yet resolutely and decisively in the realm of the nation's spirit (in composition, pedagogy, performance art, theatre and cinema). He persisted and has endured.

At first glance (or listen), Plakidis was a true instrumentalist, creating everything from miniatures to ambitious, voluminous works. In addition, an opus sparkling in unchecked humour would often swirl up next to his ever-substantial, frequently tense, contradictory works. While these pieces were invitations to repose from the usual chain of ideas and intonations, in fact they usually served as supplements, escapades, a spark of fantasy. But quite soon a clear turn, or even push, towards vocal chamber music appeared. The solo song, which had long lived in the vitality of enthusiastic lyrics, suddenly lit up with a completely different, tense and polemically intense character.