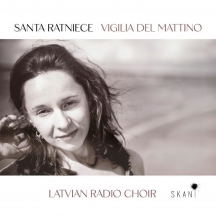 Santa Ratniece (1977) is an unusual personality among Latvian composers - a traveller and researcher whose music cannot be confused with the compositions of any other composer. Her music is processual; it is music in which time expands like an illuminated horizon, revealing infinity. Her world of sound contains layers of various depth and reaches into the stratosphere, but it also encompasses micro vibrations and sensitivity.

Ratniece often composes works that are linked to a specific geographical area and natural phenomena. Here we find the Himalayas, deep waters, pristine alpine lakes, melting ice, aromas, the warmth and coolness of air. But her compositions do not paint pictures or result in mere sound paintings. Instead, the fluidity of her music turns these phenomena into events in which the encounter with nature has become a spiritual experience.

Regarding Ratniece's music, conductor Sigvards Klava has said that "instead of notes, here the staves often contain sounds that can be impossible to incorporate into the traditional temperament system. But in spite of the very complicated score, which is often difficult to read, she does not compose with the intent to do technical tricks; she does not try to concoct or construct the composition. She composes the sound of the World. This music is so ethereal, so enigmatic - halfway between the singer's body and soul."

The fragments for the multimedia choral opera WAR SUM UP: MUSIC. MANGA. MACHINES featured on this album was an international collaboration performed by the Latvian Radio Chamber Singers under the direction of conductor Kaspars Putnins together with director Kirsten Dehlholm and the Hotel Pro Forma theatre group from Denmark.