Le Choc Du Futur (aka The Shock Of The Future) 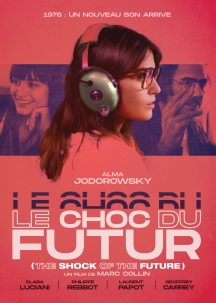 In the Paris of 1978, old formulas do not charm listeners anymore in a male-dominated music industry. Until Ana (Alma Jodorowsky) uses her synthetizers to make herself heard, creating a new sound that will mark the decades to come : the music of the future.

This day-in-the-life portrait of a struggling electronic musician circa 1978 is never happier than when it gets to fix a loving, lingering gaze on the drum machines, synths, sequencers and reel-to-reel tapes that crowd its heroine's apartment.

masterfully captures a place and time. Watch it loud

As electronic music ages and develops, more moves are being made to look into the cultural history that initially bred it. [...] The film aims to shine a light on the under-appreciated and somewhat forgotten female pioneers of electronic music.