Seven years in the making, the ultimate documentary on the legend, Lee "Scratch" Perry. 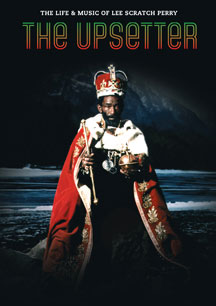 Directed and produced by celebrated independent filmmakers Ethan Higbee (Red Apples Falling, The Anti-Fascist, Basedworld) and Adam Bhala Lough (Bomb The System, Weapons, The Carter ) and narrated by Academy Award-winning actor Benicio Del Toro, The Upsetter is a captivating, unparalleled exploration charting 70 years in the life of the Godfather of Reggae and the man behind Bob Marley - Lee "Scratch" Perry. Seven years in the making, the film features musical tracks and iconic archival footage selected from throughout Perry's extensive career.

The Salvador Dali of music

…a fascinating exploration of the music business, one of its most innovative periods and one of its unsung heroes.