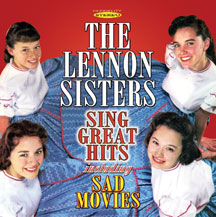 This album features 28 songs from The Lennon Sisters, which are appearing for the first time on CD, re-mastered and in stereo. The four lovely Lennon sisters from California made regular appearances on the popular Lawrence Welk TV show from 1955 to 1967. The Lennon Sisters made their TV debut on the Lawrence Welk Show in 1955 and became regulars until 1967. For a while the quartet became a trio when one sister got married and left the group but re-joined. The sisters made numerous recordings and this CD combines two LPs - 'The Lennon Sisters Sing Twelve Great Hits' and 'Sad Movies (Make Me Cry)' plus four bonus tracks.