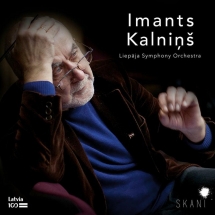 This double-CD album recorded in April of 2018 and featuring Liepaja Symphony Orchestra and renown Latvian choral conductor Maris Sirmais offers world premiere recordings of Imants Kalnins' Symphony No. 7, Oboe Concerto and symphonic miniature Santa Cruz, paired with a brand new recording of Symphony No. 5 with conductor Atvars Lakstigala. A continuation of Imants Kalnins' orchestral works (Symphony No. 4 and Cello Concerto) in an album "Dreams of Freedom", released on SKANI in 2014, this release is dedicated to the centenary of Latvian statehood in 2018. Conductor Maris Sirmais is a pillar and catalyst of Latvian choir culture. He had led thousands of singers in Song Festival concerts as well as professional musicians. Sirmais has been the artistic director of the State Choir "Latvija" since 1997. In 1881 the first philharmonic orchestra in the Baltic countries was founded in Liepaja. Presently it is known under the name Liepaja Symphony Orchestra and has become a key promoter of Latvian composers' music and initiator of creativity not only in the Kurzeme region but throughout Latvia. Since 2010 the Liepaja Symphony Orchestra has been granted the status of a national orchestra, and its chief conductor since the 2017/2018 season is Gintaras Rinkevicius. Also on SKANI: LMIC042 "Dreams of Freedom" Imants Kalnins: Symphony No. 4, Cello Concerto. Liepaja Symphony Orchestra; Marta Sudraba, cello; Atvars Lakstigala, conductor LMIC056 Lucija Garuta: Music for Piano; Liepaja Symphony Orchestra; Reinis Zarins, piano; Atvars Lakstigala, conductor