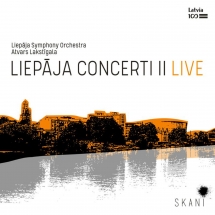 The city of Liepaja commissioned twelve Latvian composers to present their reflections about Liepaja, resulting in the Liepaja Concerti. The first compilation of the Liepaja Concerti was released in 2017 on a recording published by Odradek Records (ODRCD362, available from Proper). The double CD included the works by Rihards Dubra, Eriks Esenvalds, Juris Karlsons, Karlis Lacis and Vilnis Smidbergs. The presented by Skani is the second edition of the Liepaja Concerti. In 1881 the first philharmonic orchestra in the Baltic countries was founded in Liepaja. Presently it is known under the name Liepaja Symphony Orchestra and has become a key promoter of Latvian composers' music and initiator of creativity not only in the Kurzeme region but throughout Latvia. Since 2010 the Liepaja Symphony Orchestra has been granted the status of a national orchestra, and its chief conductor since the 2017/2018 season is Gintaras Rinkevicius. Atvars Lakstigala was the principal conductor of the Liepaja Symphony Orchestra from 2010 to 2017. Since 2009 he has been a regular guest conductor at the Latvian National Opera. Also Available: LMIC 067 "Imants Kalnins Symphonies Nos. 5&7, Oboe Concerto, Santa Cruz Liepaja SO LMIC 040 E(GO) Andris Dzenitis; Latvian Radio Choir LMIC042 "Dreams of Freedom" Imants Kalnins: Symphony No. 4, Cello Concerto. Liepaja SO LMIC056 Lucija Garuta: Music for Piano; Liepaja Symphony Orchestra; Reinis Zarins, piano