When The Streets Are a Jungle... There Can Be Only One King 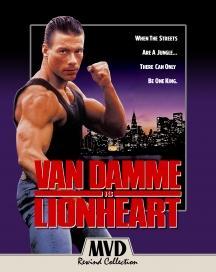 Jean-Claude Van Damme (Black Eagle, Hard Target) stars as a soldier drawn into the world of modern-day gladiators fighting for the amusement of the rich in this fast moving action thriller co-written by Van Damme himself!

Upon receiving news that his brother in Los Angeles is seriously injured, Lyon Gaultier (Van Damme) Deserts the French Foreign Legion from a remote outpost in North Africa. Fleeing from two of the Legion's security force who have orders to bring him back at any cost, Lyon reluctantly turns to the illegal, bare-knuckles underground fighting circuit to raise the money he needs to help his brother's family.

Accompanied by an occasionally jazzy score, the film has a solid dramatic base on which to build the Jean-Claude Van Damme action.

MVD Rewind have done a killer job compiling their special features for their Lionheart Blu-ray, managing to land new interviews with Van Damme himself. It's wonderful to find someone putting this level of care into any classic Van Damme flick, but especially a lesser-celebrated one such as Lionheart. Kudos to MVD, too, for once again nailing the ex-rental VHS aesthetic in their box art.