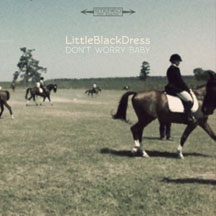 Following their critically acclaimed debut album Snow In June, Little Black Dress returned to the studio to knock out a cover of the legendary 1964 Beach Boys classic, Don't Worry Baby. This limited edition single also includes a new Little Black Dress song Underoverpass. The download version of the release, includes 2 additional LBD songs. All songs were recorded and produced by Toby Pipes and Nolan Thies. Don't Worry Baby is part of the Rock and Roll Hall of Fame's 500 Songs That Shaped Rock and Roll list, and ranked as the 176th Greatest Song of all Time in Rolling Stone's 500 Greatest Songs of All Time.