Based on truth and lies 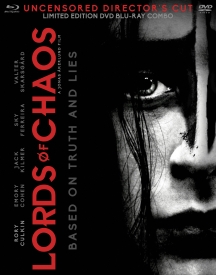 "The story of True Norwegian Black Metal and its most notorious practitioners: a group of young men with a flair for publicity, church-burning and murder: MAYHEM. Oslo, 1987. Seventeen-year-old Euronymous is determined to escape his idyllic Scandinavian hometown and create "true Norwegian black metal" with his band, MAYHEM. He's joined by equally fanatical youths - Dead and Varg. Believing that they're on the cusp of a musical revolution, the group gets even darker, driven by the black metal dogma to spread evil. They begin burning down churches throughout the countryside and stealing tombstones for their record store. But when the press catches up with them and Euronymous takes more credit than he's earned for the group's violent acts, Varg, fresh out of jail, arranges a dark encounter to settle the score and ultimately determine who the darkest black metal musician is."

Frequently unpleasant but oddly compelling - not least because Åkerlund ensures that the film never takes itself as seriously as its subjects did.

Åkerlund stages the film's violence with an unsettling, unflinching reality, to drive home the difference between entertainment and the real world.

Inside Culkin's quietly convincing performance, deadpan cynicism battles with genuine tenderness in a way that gives the film an affecting yet appropriately faulty soul.