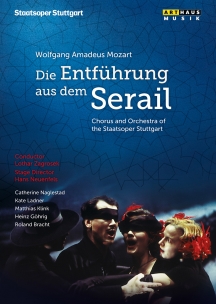 Legendary director Hans Neuenfels once again proves his great skill with this interpretation of Mozart’s Entführung aus dem Serail” (Abduction from the Seraglio). This extraordinary production conducted byZagrosek, Lothar, and with Catherine Naglestad, Kate Ladner and Matthias Klink in the main roles, won the Bavarian Theatre Prize in 1999 and offers a refreshingly new view of one of the most frequently played operas worldwide. Special highlight: Neuenfels places an actor at every singer’s side who not only takes over his role for the spoken original scripts, but also interacts with his singing double and other characters of the piece. In recent decades, directors have sought to revitalise the somewhat naive plot of the Entführung” with fresh interpretations. Hans Neuenfels, who produced his first Mozart” here in Stuttgart, retains the story’s naivety and absurdity. He does this in a very stimulating and intelligent way.