The greatest untold story in Rock and Roll...Until now! 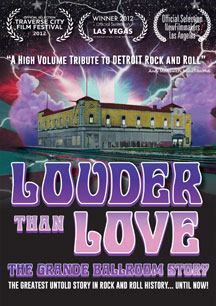 While the West Coast was groovin' to the sounds of the "Summer of Love" in 1967, Detroit was pumping out a hard-driving, gritty and raw sound that was "Louder Than Love." The Grande Ballroom stood as the epicenter of the Detroit rock music scene that spawned in the late '60s. Serving as the starting point for bands such as MC5, Iggy & The Stooges, Ted Nugent & The Amboy Dukes and more, the Grande not only influenced local Detroit musicians but inspired bands from all over the U.S. and Great Britain. Legendary acts like Led Zeppelin, Cream, B.B. King, Janis Joplin, Pink Floyd and the Who soon began to grace the stage at the Grande on a regular basis. This story is about the hallowed halls that started it all, told by the artists who helped create its epic stature.

A must-see film for anyone who gives a shit about the history of rock-n-roll and '60s counter culture.

Looks straight into the the eye of a rock storm