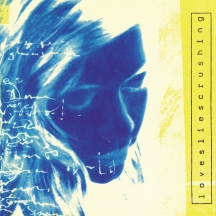 A classic mid-90s release in the shoegazer genre.

A beautiful labyrinth of noise… a combination of Melissa’s ethereal vocals and Scott’s saturated, overloaded distortion wrestled from his 12-string guitar. The resulting “ethereal noise” is chaotic and innovative… gritty, choppy, stunning and beautiful. A sound that captures the sensation of falling, floating on a wave of sounds bleeding into one another like staining watercolors.

”This criminally overlooked duo’s debut album is a true masterpiece of atmosphere. At its core, bloweyelashwish is the graceful interplay of heavily reverbed guitar and angelic vocals conveyed through a tangled palette of genres (shoegaze, noise pop, ambient, drone). The concept is elevated to breathtaking heights through a haunting combination of lo-fi soundscapes, abstract layers, atonal droning, and heavily processed noise passages – and the results are nothing short of otherworldly. Captivating and occasionally unsettling, these songs come through like ghostly transmissions from another dimension. -AC