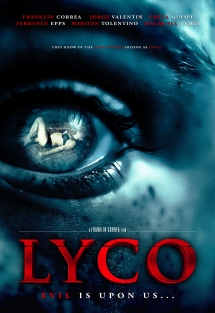 Lyco is a action horror film about a voodoo priest named Lyco Fontaine (Macquell James) who is in search for an ancient Relic that has been around for centuries called the Port of Spain elephant. It is said thought the elephant statue has special powers and if Fallen into the wrong hands the innocence of the world would be in danger. Receiving a job to transport a relic which turns out to be the Port of Spain elephant, Shelly Ruiz (Marilyn Tolentino) & her cousin Sandra Ruiz (Greta Quispe) knowing the risk of everyone wanting this Relic, they ask for the help of fellow comrades in the Courier Service field Chucho (Jorge Valentin) along with his close friends and co-workers Bobby (Franklin Correa) & Darius (Tee Epps) who agreed to help and split the profits down the middle. But little do they know of the dark Forces arising as Lyco gets closer his powers get stronger, and will stop at nothing to retrieve it unless it is stolen once again. Mrs. Maria Rueben ( Sandra Fernandez) an ancient Relic collector and millionaire also knows of The Relic being on the black market and wants it for her private collection and will stop at nothing as well hiring a pair of killers Tavares (Miguelina Olivares) & Jerry (Bruno Barros) to take everyone out & the relic to her leaving the Courier's with a 48 hour time frame to get the Relic to its rightful place before all hell breaks loose.