MOTORCADE - See You In The Nothing 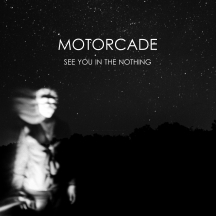 Limited Edition Clear Vinyl LP MOTORCADE is a band from Dallas, Texas. Members are James Henderson, Andrew Huffstetler, John Dufilho and Jeff Ryan. All four individuals have recorded and toured relentlessly in many different projects over the years, (St. Vincent, The Apples In Stereo, The War On Drugs, The Deathray Davies, Baboon and Daniel Johnston among others). "Hitting on every pressure point of late '80s-early '90s button-the-top-button songcraft a la Depeche Mode, New Order, Echo & The Bunnymen, The Jesus and Mary Chain, and so on, MOTORCADE will melt away the years for anyone who grew up in the era, and make anyone who wanted to, jealous." -The Big Takeover "A Britpop-flavored, love-at-first-listen. Anyone who came of age in the era of early MTV and the British Invasion's second wave might just feel a kinship." - KXT, Dallas "Doses of '80s-like brooding co-mingle with uplifting choruses. Suggests great things to come from the Dallas-based outfit." - PopMatters "Mixing post-punk with '60s psychedelia. The kind of thing we could see folks nationwide latching onto." - Central Track "A charming piece of indie rock that recalls Phoenix and Tame Impala, a thick mass of guitars and synthesizers from which a sharp hook emerges." - MAGNET "Consistently smart arrangements...the sense of atmosphere and texture combined with these great hooks. The melodic elements in every song pull you in and give you a sense of this of this isn't just a throwaway, this isn't just a filler track. Every track has a certain amount of resonance. I haven't heard an album as consistent from an indie rock band in a really long time." -Greg Kot-Sound Opinions Also Available: MOTORCADE - S/T LP UPC: 098054213811 Rel. # IR138