WHEN GOD CREATED LIGHT, THE FIRST SHADOW WAS BORN! 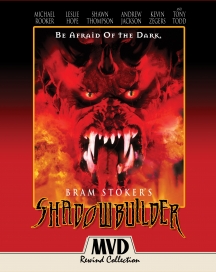 A demon is summoned to take the soul of a young boy, who has the potential to become a saint. If the demon succeeds, it will open a doorway to Hell, blazing a terrifying trail of destruction, possession and mayhem and destroy humanity. Now the fate of the world hinges on the final outcome of a renegade priest's battle with the soul eating SHADOWBUILDER.

From the mind of the master, Bram Stoker, the creator of "Dracula" comes the epic struggle between good and evil in SHADOWBUILDER, featuring an all-star cast that includes Michael Rooker (Guardians of the Galaxy), Leslie Hope (Crimson Peak), Kevin Zegers (Dawn of the Dead) and Tony Todd (Candyman).

I really think the filmmakers were having a lot of fun making this movie... and viewers will have as much fun watching it!