Left without men in the dying days of the American Civil War, three women must fight to defend their home and themselves from two rogue soldiers 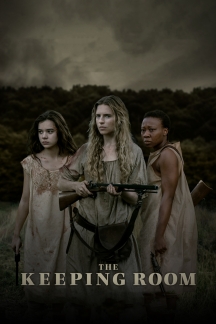 In this reimagined Western set towards the end of the Civil War, Augusta encounters two renegade soldiers who are on a mission of pillage and violence. When the pair of soldiers track her down intent on revenge, the trio of women are forced to take up arms to fend off their assailants, finding ways to defend their home and themselves as the attacks become more unpredictable and relentless.

Writer Julia Hart and director Daniel Barber develop the women's relationships at a careful, steady pace, giving them time to bond; this is essential since they must learn to trust and respect each other to survive.

Dark, brooding and brutal, 'The Keeping Room' features finely carved performances in a Civil War period piece that might as well be post-apocalyptic.