Life in the Doghouse (Special Edition) 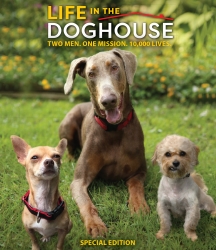 LIFE IN THE DOG HOUSE tells the inspiring life stories of Danny Robertshaw and Ron Danta and the remarkable work they do at Danny & Ron's Rescue. Ten years and 10,000 dogs later, their unique approach to life and dog rescue will capture hearts and inspire millions to make the right choices when it comes to man's best friend. This Blu-ray includes 5.1 surround sound, stereo and English subtitles for the deaf and hearing-impaired.

If you're a dog lover and especially if you've had any experience with rescue animals, Life in the Doghouse will be a really worthwhile viewing experience, though have your tissues handy for some of the more emotional moments.