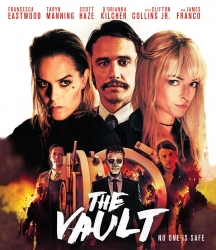 Two estranged sisters are forced to rob a bank in order to save their brother. The heist begins smoothly, but mayhem ensues when the defiant bank manager sends them to a basement-level vault -- home to something truly evil. Starring Academy Award® nominee James Franco (SPIDER-MAN, 127 HOURS, PINEAPPLE EXPRESS) and Taryn Manning (ORANGE IS THE NEW BLACK, 8-MILE, SONS OF ANARCHY), THE VAULT is the latest film from genre writer-director Dan Bush (THE SIGNAL). Blu-ray includes 5.1 surround sound, stereo and English subtitles for the deaf and hearing-impaired.

'The Vault' is a combination heist and horror picture; and it's the rare genre mash-up where each element's equally strong.

The Vault is a strange but successful mixture, a heist thriller-turned-horror movie.

The Vault is one of those films that have no right to be as good as they are, given that it is that most unlikely of genre-defying hybrids -- the bank robbery film with added, er... supernatural chills.

Though it could do with being weirder and wilder, this high-concept mash-up - what if crooks robbed a haunted bank? - features fine work from a brace of rising stars.

This is all great fun and as the heist begins the robbers are revealed to be a charismatic bunch with a very interesting dynamic.