Jo dreams of becoming a superhero but is terminally ill, inspiring her village to rally and make her dream come true. 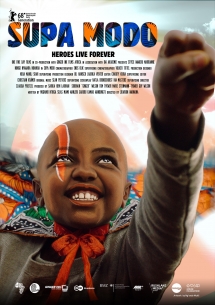 Jo, a witty 9-year old terminally ill girl is taken back to her rural village to live out the rest of her short life after being diagnosed with cancer. Her only comfort during these dull times are her dreams of being a Superhero, which prove to be something her rebellious teenage sister Mwix, overprotective mother Kathryn and the entire village of Maweni think they can fulfill. From first-time feature filmmaker Likarion Wainaina and co-producer Tom Tykwer comes this honest and inspiring story about the strength of young people in the face of adversity. Obsessed with Jackie Chan and action films, nine-year-old Jo dreams of being a superhero, but time is not on her side. When the doctors reveal that she is terminally ill, Jo leaves the hospital and returns home to be with her mom and sister. While her mom insists that she stay inside and rest, her sister has different plans. With the entire village's support, they decide to make dreams a reality and turn Jo into the superhero they know she is. Newcomer Stycie Waweru delivers a captivating and earnest performance, imbuing her character with a subtle strength that ignites the screen. This film is a stunning reminder of the power of imagination.

Brutal and beautiful, melancholy and joyous, 'Supa Modo' is simultaneously crushing and uplifting. Brent McKnight, Seattle Times Endearingly bleak, charmingly honest, Supa Modo is not (only) a superhero movie, but it is super, heroic, a treat, even a blessing. Eyeforfilm Balancing sadness with comedy and with a great cast, especially Stycie Waweruwho plays Jo, she lights up the screen and is able to see and understand what is happening to her but her illness isn't going to stop her from having fun. Katie Hogan, Vulture Hound A love letter to the power of escapism, a devastating portrayal of grief and a Kenyan family drama that defies stereotypes, Supa Modo serves as an important reminder that even when heroes die, they can continue to inspire others long after they're gone. David Opie, Little White Lies

A love letter to the power of escapism, a devastating portrayal of grief and a Kenyan family drama that defies stereotypes, Supa Modo serves as an important reminder that even when heroes die, they can continue to inspire others long after they're gone.