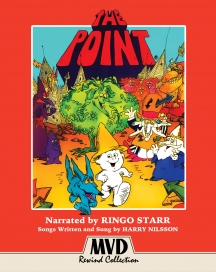 Directed and animated by Academy Award® Winner** Fred Wolf (Free To Be... You & Me, The Flintstones) with story and songs written by Grammy Award® Winner** Harry Nilsson and narration by Ringo Starr, THE POINT is a timeless enchanting fable for the whole family to enjoy!

Years ago there was a place called The Land of the Point, because everything in The Land of the Point had one - the barns, the houses, the cars, everything - even the people. Everyone, that is, except Oblio (Mike Lookinland, The Brady Bunch), who was born round-headed. Since he had no point, Oblio - along with his trusty dog, Arrow - was banished to the Pointless Forest. Join them to see what wonders await these two intrepid travelers as they make their way on their amazing, song-filled journey of discovery!

The Point is absolutely sui generis... It's a lot of fun and Nilsson's music is captivating. The supplemental package here is great. Recommended.

For fans of The Point, old and new, this is certainly a welcome package... With a bevy of fine bonus materials to back it up, it's worth the purchase.