A Guide to Recognizing Your Saints

SOMETIMES THE ONLY WAY TO MOVE FORWARD IS TO GO BACK 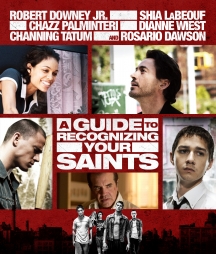 A coming-of-age drama about writer/director Dito Montiel's (Fighting) youth, the film captures the mid-1980's in the toughest neighborhood of Astoria, Queens. Dito (Academy Award Nominee* Robert Downey Jr., Avengers: Endgame) called home after 15 years because his father (Academy Award Nominee** Chazz Palminteri, Bullets Over Broadway) is ill, encounters old friends - the ones he lost, the ones he left behind, the ones he can't help but remember. These are Dito's saints. An honest account of a bittersweet return to a neighborhood where relationships can never be what they once were, Dito's story is about to come to terms with a father's rage and a father's love.

It positively crackles with energy, featuring startlingly raw performances from a cast that also includes Shia LaBeouf as the young Dito. And if it looks ragged around the edges, that's as it should be.

A memoir to remember.