WHEN BETTING YOUR LIFE... LEAVE NOTHING TO CHANCE. 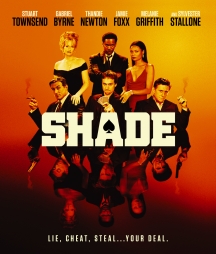 The hand is quicker than the eye in L.A.'s underground gambling scene, hustlers get hustled and fortunes ride on every deal. Three small-time grifters devise a plan to beat the ultimate card mechanic - The Dean (Sylvester Stallone). But a seat at the Dean's table doesn't come cheap.

A dramatic thriller with a large cast playing the hell out of some very juicy roles.

Ante up for this one.

Shade benefits from an at least somewhat unusual setting and some really nicely nuanced performances... It's a rather invigorating effort at times from Damian Nieman.

The high definition transfer for the film is clear and sharp. If you've never seen this film, this is the right place to catch it.