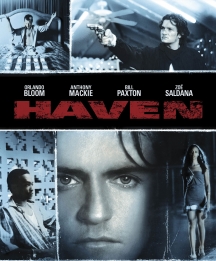 On the idyllic shores of the Cayman Islands, Shy (Orlando Bloom, The Lord of the Rings Trilogy) and Andrea (Zoe Saldana, Guardians of the Galaxy) share a secret her parents can never know... they are in love. But a night of passion leads to their discovery and a devastating act of vengeance by Andrea's brother (Anthony Mackie, Captain America: Civil War). Meanwhile, a shady American businessman (Bill Paxton, Aliens) has fled with his daughter to the Islands to avoid federal prosecution, only to be drawn into a dangerous web of deceit. As lives intersect and truths are revealed, a chain reaction of violence is set in motion that will determine whether love can survive the fall of paradise.

What the film lacks in dramatic depth it makes up for in its visuals, which keep viewer attention even when the story drags.