LIFE IS A GAMBLE. HOW MUCH ARE YOU WILLING TO RISK? 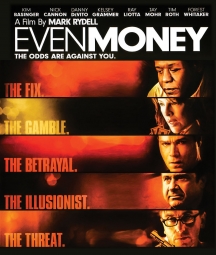 Academy Award winners* Kim Basinger and Forest Whitaker join Danny Devito and an all-star cast in this compelling thriller directed by Academy Award nominee** Mark Rydell that follows the lives of nine individuals, as their fates become increasingly entwined in a web of addiction and gambling, culminating at one critical moment where their lives will be lost or reclaimed.

Struggling writer Kate (Kim Basinger) loses her family's savings at a casino; a washed-up magician (Danny Devito) tries to help Carol regain her money; Clyde (Forest Whitaker) owes so much money to his dangerous bookie (Jay Mohr) that he asks his NBA-destined nephew (Nick Cannon) to throw the game. Also starring Kelsey Grammer, Tim Roth, Ray Liotta and Carla Gugino, Even Money is a cautionary thriller about addiction and deception that hits a jackpot of suspense.

Ambitious as it is, Even Money truly succeeds as a gripping story about our urge to want more; more love, or more money, or just more life

The film is definitely worth a look.

Strong performances save this somewhat melodramatic film from sudsing up.