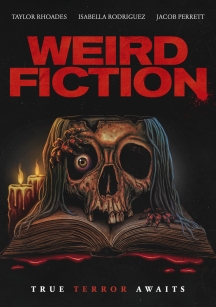 The Collector's Midnight Halloween Special airs once a year, with four tales of terror, each more horrifying than the last. Follow the story of a group of teens in search of a missing body, a babysitter's horrifying night, a vampire adult star, and two girls as they uncover what may be the end of the world as we know it. This is - WEIRD FICTION.

Falls closer to John Carpenter's Body Bags than something like Creepshow or one of the grandaddy's Trick 'R Treat... a mix of Stand By Me and Halloween.

The entire movie has a wonderful 80s vibe that makes it fun to watch. It definitely fits right in with classic anthologies from that era like The Monster Club (1981), Creepshow (1982), Twilight Zone: The Movie (1983), and Deadtime Stories (1986).

Weird Fiction separates itself from the pack by being not only well constructed, but fun and charming.

A damn fine film that shows Perrett must have a bright future ahead of him as a writer and director.

These kids obviously love horror - there is hope for the next generation.