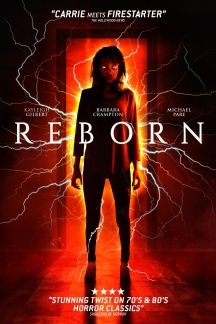 Barbara Crampton (Re-Animator), Michael Pare (Streets Of Fire), Chaz Bono (Three From Hell), Rae Dawn Chong (Commando) and Monte Markham (The Six Million Dollar Man) star in REBORN, a paranormal horror about stillborn girl who is brought back to life by an electrical storm and abducted from hospital by a morgue attendant. On her sixteenth birthday, empowered with the ability to manipulate electricity with her mind (electro-kinesis), she escapes her captor and sets out to find her birth mother leaving a trail of destruction behind her.

Reminiscent of Frankenstein and Carrie...a fascinating and fast-paced thrill ride

Don't miss this stunning modern twist on 70s and 80s horror classics like CARRIE, FIRESTARTER, and THE FURY

Fans of Barbara Crampton absolutely need to check this out