Meaningless in a hostile city 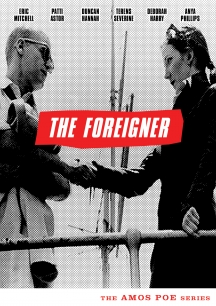 This is a 1978 New York drama from "No Wave" director Amos Poe. European Max Menace arrives in New York City on an unknown mission. Boredom sets in as he waits for his assignment. Alienation thrusts him into entanglements with women, weirdos and creeps. Their unstructured lives echo the purposely-meandering storyline. "The Foreigner" is about the reality of being meaningless in a hostile city.