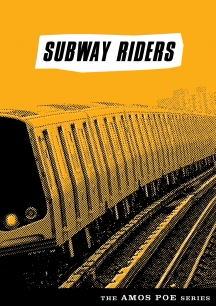 SUBWAY RIDERS is a chilling melodrama of angst, alienation and obsession. Poe and his Director of Photography (and producer) Johanna Heer use color (lurid reds and neon blues) symbolically and odd camera angles subtly underscore the premise that the characters are not simply bizarros alienated from society, but rather that anomie is the definitive characteristic of the modern world itself. SUBWAY RIDERS' music does not merely accompany the film, but occupies its own aural space and so adds its own distinct perspective to this highly stylized, richly textured portrait of a world of random murders.

Poe's melding of traditional film noir elements with a frenetic new wave sensibility electrifies the audience with the intensity of a third rail.

Subway Riders’ highest value lies perhaps in its outlying elements, rather than the central thrust of the film itself: the soundtrack, the visuals, the historical significance of featuring one of Coltrane’s first roles, and Lurie’s saxophone solos.