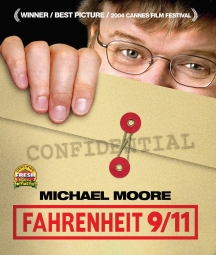 In the most provocative film of 2004, Academy Award© winner Michael Moore (2002, Best Documentary, Bowling for Columbine) presents a searing examination of the role played by money and oil in the wake of the tragic events of 9/11. Moore blends captivating and thought-provoking footage with revealing interviews, while balancing it all with his own brand of humor and satire.

Fahrenheit 9/11 centers in on emotion, and is undeniably effective. This release has decent looking video and the supplemental package is quite well done. Recommended.

The Year's Must-See Film! Compelling, Funny, and Most of All, Entertaining!

Bullseye! 'Fahrenheit 9/11' More Than Lives Up To Its Reputation... Fascinating!