Where The Red Fern Grows 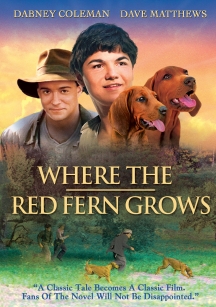 Wilson Rawls' unforgettable classic story about a boy and his dogs has been loved for generations. Now all the adventure and simple wisdom of the cherished novel come alive in the all-new movie WHERE THE RED FERN GROWS

What 10-year-old Billy Coleman (Joseph Ashton, Slappy and the Stinkers) wants most in the world is a hunting dog. After two long years of hard work, he saves up enough money to buy a pair of redbone hound pups, and its love at first sight! Before long, Billy trains "Old Dan" and "Little Ann" to be the finest hunting team in the valley. As the inseparable trio chases the wily "ghost raccoon" and confront danger together, Billy learns the meaning of loyalty, courage, and perseverance.

A remarkable and deeply affecting retelling of the timeless coming-of-age story.

A classic tale becomes a classic film....sure to enchant audiences of all ages.

If you loved the book, you'll cherish the movie.

Not to be missed!

Parts of this version may admittedly be a little hackneyed, but there's also an honesty to the performances that becomes increasingly moving.

A great example that some of the so-called older films can still give modern Hollywood movies a run for their money.

It’s a solid film; I don’t know that it’s the definitive adaptation of the book, but it’s worth a watch if you’re looking for something along those lines.

This isn’t Oscar fare but a strongly traditional tale of family and values nicely put together for the screen.

As the inseparable trio chases the wily “ghost raccoon” and confront danger together, Billy learns the meaning of loyalty, courage, and perseverance.