If You Have The Guts - He Wants Them! 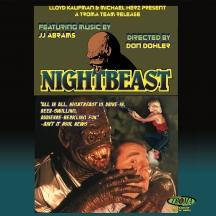 An alien with an appetite for blood & disembowelment is set loose on a small town when its spacecraft crashes. Sheriff Jack Cinder & local militia arrive on scene, a violent battle ensues, leaving only Jack, his deputy & a wild-eyed redneck as survivors. With a corrupt mayor unwilling to stand up against the Nightbeast's reign of carnage, it's up to Jack to evacuate the townsfolk & save the day!