The Wind In The Willows 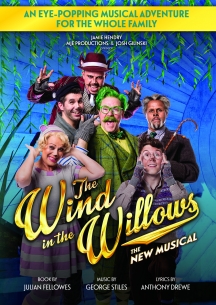 The hit musical from creator of Downton Abbey, Julian Fellowes and award winning composer and lyricist, George Stiles & Anthony Drewe. Join Ratty, Badger, Mole and the impulsive Toad on a series of riotous adventures spiraling from Toad's insatiable need for speed! Featuring eye-popping design, exuberant choreography and a glorious score, the show is packed with comedy, heart and thrills.