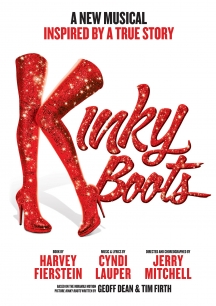 Winner of the Tony® Best Musical, this huge-hearted hit is a story of two people with seemingly nothing in common. Factory owner Charlie is struggling to save his family business, and Lola is an entertainer with a wildly exciting idea. This unexpected pair learn to embrace their differences and create a line of sturdy stilettos! But in the end, their biggest achievement is their friendship.

When it's good, 'Kinky Boots,' the new Broadway musical with the rocking Cyndi Lauper score, is sweetly, vivaciously, irresistibly good.

The musical highlights are the more boisterous numbers, where Lauper imbues textures lifted from the Motown and disco eras with a sizzling theatricality that's bound to put a little more spring in your step and cheer in your heart.

Kinky Boots: The Musical may make some already patently obvious points about tolerance and being "different", but it does so with a surplus of heart and with a really very nicely fluid stage presentation. Recommended.