HE'S A LEGEND. YOU'RE HISTORY. 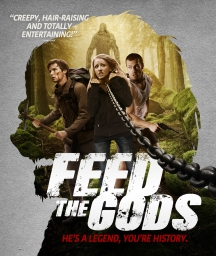 Two brothers (Resident Evil: Afterlife's Shawn Roberts and The Killing's Tyler Johnston) return to a small mountain town in search of their long lost parents only to discover that the place has a monstrous "taste for tourists." Rumors of a Bigfoot creature at first seem silly, but soon the unthinkable becomes real and the town's insidious past emerges. Writer-director Braden Croft (Hemorrhage) delivers horror, blood and laughs in equal measure in a nod to Sam Raimi's early films.

Feed the Gods boasts rather considerable technical competency, and the performances are uniformly winning. There are some lunatic moments in the second half of the film that are undeniably comic simply because things get so chaotic.