When We Last Spoke

There is no place like home with your family 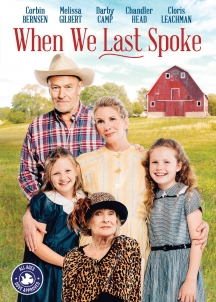 In 1967, sisters Juliet (Darby Camp) and Evangeline (Chandler Head) are abandoned by their mother at their unsuspecting grandparents' farm in the small southern town of Fireside. Stunned by their sudden arrival, tender-hearted Walt (Corbin Bernsen) and champion fiddler Ruby (Melissa Gilbert) graciously stand in for the missing parents and create one blue-ribbon recipe for a loving family. Fireside, home of radio Station KOFF, kept secrets, broken promises and to-die-for sundaes serves as the backdrop for this heartwarming story full of surprises. Top it all off with the unexpected appearance of Walt's ailing mother--eccentric, Emily Dickinson-quoting Itasca (Cloris Leachman), and laughter and tears abound. Richly packed with plenty of quirky characters and hilarious escapades, When We Last Spoke is a timeless movie for all ages that digs in deep to things that matter most--family, friends, love, and forgiveness.

'When We Last Spoke is everything the filmmakers promised and more, full of friends, family, love and forgiveness...This was the most emotionally evocative film I saw during the entire festival--in fact for years.'